Home / Blog / What Is Gambler’s Fallacy?

What Is Gambler’s Fallacy? 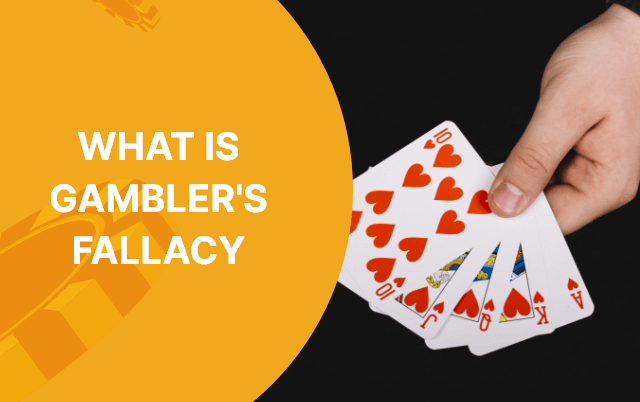 The recipe for regularly winning at a casino remains a secret, regardless of the elaborate systems we often apply to decipher the games and their probabilities. The famous gambler’s fallacy is among the primary culprits for such a situation, and this line of thinking causes massive losses, empty bankrolls, and devastating headaches.

So, what is gambler’s fallacy? How can it affect your gaming sessions at some of the best US online casinos?

It can have a profound impact, and that’s why our in-depth guide dissects the topic and explains the fallacy with examples. Therefore, let’s dive into the mysterious world of casino games’ probability and gambler’s expectations.

How many times have you felt confident about predicting the outcome of a coin toss? Or fell into the trap of believing that the next toss will go a certain way because the previous three have gone in the opposite direction?

We’ve all been there, and many of us have lost substantial amounts because of this irrational perception. To explore the phenomenon, we should start by defining it and discuss its notable characteristics.

What Is Gambler’s Fallacy?

In essence, gambler’s fallacy is an incorrect line of thinking about the outcome of random events. More precisely, it deals with individual results of those events, refusing to accept that they are independent and unaffected by previous ones.

To explain this in plain terms, we can once again go back to the coin toss experiment. Assuming the toss is fair and random, the outcome of the first and the second toss are in no relation. Yet, the gambling fallacy creates a cognitive bias stating that the second result is more likely to be heads if the first was tails.

Thus, gambler’s fallacy affects our decision-making process and draws conclusions with no evidence to support the claim. In other words, every coin toss has a 50–50 chance of going either way. No belief will change those odds, nor will the previous five times you had heads provide any guarantee that the sixth toss will fall on the same side.

The second name for the concept of gambler’s fallacy would be the Monte Carlo one. As expected, it comes from the gambling Mecca in Monaco. Back in August 1913, roulette enthusiasts gathered around a wheel in a casino in Monte Carlo. Some of them bet on red while others placed chips on black, but no one could predict that the ball would land on black 26 times in a row!

As we said in the gambler’s fallacy definition, our misguided intuition tells us that the red “is due” after several spins of landing on black. This superstition triggered players to bet millions on red, thinking that it would arrive in the next round, and then the next, and so on. Eventually, the ball stopped on the black-coloured pocket in the 27th spin! By that time, many players lost their entire fortunes.

Interestingly, the event in Monte Carlo is not the record-holder for consecutive appearances of one colour in roulette. Namely, in 1943, a casino in the USA saw the ball landing on red 32 times in a row!

The fundamental problem with gambler’s fallacy is that we assume and accept premises without evidence. By refusing to acknowledge that every coin toss is unpredictable and random, we often “get a feeling” that a particular outcome is more likely than another.

In the same way we develop false beliefs about future events, we sometimes apply the reasoning to past situations. During those moments, so-called inverse gambler’s fallacy misguides our conceptions of the relation between past and current events.

In practice, the reverse or retrospective fallacy appears when we assume that landing double sixes requires rolling the dice many times before. However, every time you roll the dice, the odds of landing double sixes are the same, regardless of previous attempts. To be precise, the probability remains at 1/36 for every dice roll.

No matter which gambler’s fallacy we are discussing, it’s clear that this phenomenon transcends the gambling realm. Let’s see where this type of superstition also plays a role.

Even though it bears the name “gambler’s”, this category of logical fallacy often appears in the stock market and many other areas. For instance, investors often liquidate a position because they believe that a decline is imminent after a series of upward movements. A string of successful outcomes generates an erroneous belief that the price will drop in the next trading session.

Of course, the coin toss and the roulette wheel are clear-cut gambler’s fallacy examples. But, believe it or not, gambler’s fallacy is also common in parenting. For example, many parents firmly believe that the second child will be a boy if the first is a girl. Also, they are confident that, after three or four girls, the following offspring will undoubtedly be a boy.

The root of these superstitions lies in the gambler’s fallacy. Remember, we define gambler’s fallacy as an incorrect belief that a repeated occurrence of an event must lead to an alternative outcome in the future. Thus, believing that something will happen “because it didn’t happen in a while” can be an irrational line of thinking.

In other words, people naturally look for patterns. For instance, most people will implicitly assume that a five-round coin toss should look like this H-T-H-T-H. Even so, an H-H-H-T-T outcome bears almost the same odds. Arguably, the Law of Big Numbers might affect these theories, so let’s check what happens when we play casino games on the best gambling sites.

As we mentioned a couple of times, gambler’s fallacy deals with odds and the so-called hot streaks. Most casino goers are hunting for patterns and strings of outcomes that can boost their bankrolls. However, the famous hot-hand fallacy often clouds our judgment, and we think that a winning streak will continue for days.

In essence, gambler’s fallacy and the hot-hand fallacy work in the opposite direction. That’s why it is essential to reduce the effects of these biases, leaving a player to battle only against the probability of winning casino games.

US online casinos can offer an almost endless selection of games, many of which come with unique features affecting the winning chances. Nonetheless, the rule of thumb says that table games provide the best odds because the element of skill plays a significant part. Thus, opt for blackjack or poker if you want to reduce the house edge.

Like we said when talking about the most prominent gambler’s fallacy examples, roulette and slot machines are prone to lead players into the cognitive bias trap. Even the most experienced players start to think that RNGs are not so random after all, and this erroneous perception can quickly drain any bankroll.

Whether we like them or not, both the hot hand and gambler’s fallacy are essential elements of a casino gaming experience. In some cases, they can be beneficial and help players capitalise on a hot streak. Yet, one should never base a strategy on gut feelings and superstitions. More often than not, this type of decision-making will lead to losses and disappointment.

Hopefully, our guide answers the question “What is gambler’s fallacy?” and helps players understand the risks of making an erroneous judgment. Remember, if something didn’t happen in a while, there’s no guarantee that it will happen in the next round.